Kara has been a friend for a long time. She lives out in California now, but we still keep in touch … mainly through texts, but I have had the chance to see her in person twice this year.

The thing I like most about Kara is that she makes me laugh. A lot. Like a few weeks ago when I got this photo on my phone. 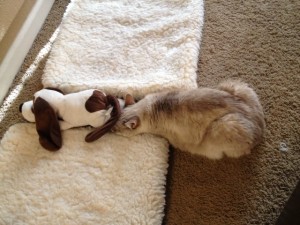 According to the accompanying message, her cat had too much Fancy Feast and passed out into the back-end of a stuffed dog. Dan and I had just come home from a date night, and he also had too much Fancy Feast. (Or scotch. Whichever.) So I took a photo and sent it back to her with a note that said “I staged this just for you.” (Sorry, Dan!) 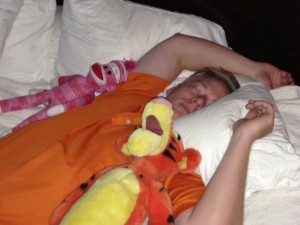 The next day, Anabella was working on a school project — Flat Stanley — that needed to be mailed out of town. So, of course I thought of Kara. She would make it fun. I sent her this photo and asked her if she would mind helping Anabella. 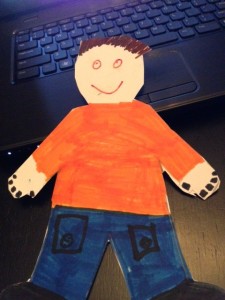 She graciously accepted … and didn’t even point out that I was asking a woman who was nine months pregnant to do homework. And then I got this photo back. 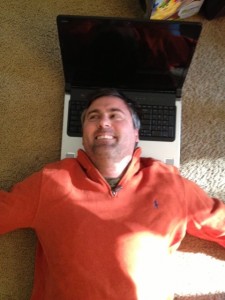 A true “LOL” moment. I did tell her that she and her hubby Mike had way too much time on their hands. But I have to say, that was the best laugh I had in weeks.

Since Flat Stanley arrived at their house, she has been taking him all over town and sending me and Anabella photos from all his adventures. He sang with a band, performed in a magic show, hit the gym, enjoyed a spa day, visited the state capitol … he’s never going to come back. 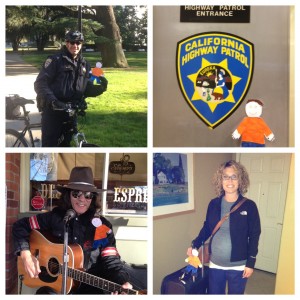 He even went with Kara to the hospital last night, where he is waiting for her to have her first baby.

Kara, you are a great friend … and you are going to be an excellent mother!

P.S. This was one of the gifts at her baby shower. A take-off on the diaper cake, but so much hipper!

WTF is up with this place? Is this the most bizarre dental office ever? 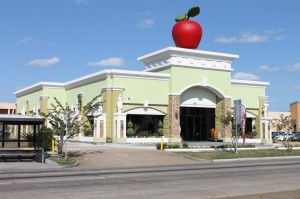 (click for larger version)
Being a dental office, I’m not sure what is up with the big ass apple and all the Greek goddesses. Clearly this person is confused. He likes fruit, he likes the ladies, so surely we can incorporate all that into our decor, right? (I say “he” because I doubt any woman would have signed off on this mess.) Perhaps he should have taken the advice of Coco Chanel and removed one item when he was done. I’m thinking the apple.

I only have one word for this (besides WTF? of course) and that would be YUK. 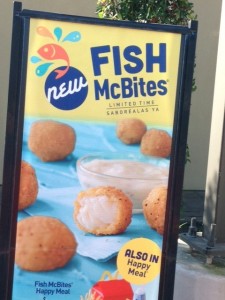 Everything this past weekend revolved around Girl Scout cookies. Driving to BFE to pick up the cookies, then unloading the 200 cases of cookies (that’s over 2,000 boxes!) into my garage. Sorting the cookies into each girl’s order. Having the Girl Scout moms come by to pick up their cookies. Counting and recounting. And still effing up two orders. Ugh.

I suck at math (thank goodness for Excel) and having all these cookies around is way too tempting. We ate 1/2 a box of peanut butter sandwiches and an entire box of carmel delights yesterday. These cookies need to go adios! 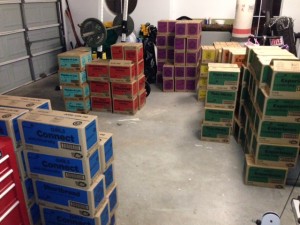 Why are you trying to scare the shit out of me?” edition 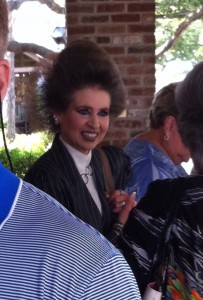 I don’t typically like to make fun of the way that people look. It’s not cool. But, I gasped when I saw this lady … she was startling. Not sure if it was the super crazy beehive/rat’s nest hair-do or the over-the-top makeup, but someone should be a good friend and tell her that she needs to take it down a notch. Even just one or the other!

#2 The last place I want to use the bathroom 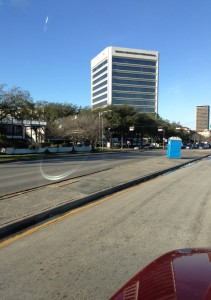 For those you in H-town, this is currently on Allen Parkway for the use of the poor guys doing road construction. For those of you not from Houston, I call this street “The Road of Bad Decisions.” I’ve been driving to and from work on it for nearly five years, and I cannot tell you how many wrecks I have seen on this winding road. MANY of which involve someone launching his or her vehicle over the median into oncoming traffic. Therefore, I would nominate this for the scariest bathroom ever. I would rather pee myself. 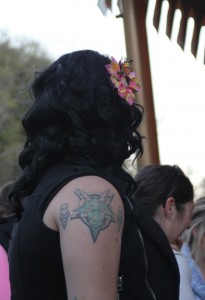 I call her this because she was at Disneyland, known as “the HAPPIEST place on Earth,” not “the place where I have to explain to my children why you have an EYEBALL in the middle of your hair flower.” (I also enjoy the ice cream cone tattoos topped with skull heads. That will make those children rethink frozen treats.)

Seriously, WTF? Who would wear something like this to a place packed with sweet little kids who just want to hang out with princesses and meet Mickey Mouse? And adding the butterfly doesn’t make it better. That’s just more disturbing.

So which do you find the scariest?

I have an excuse for my extended absense this time … we just got home from 10 days of vacation. I wouldn’t call it relaxing, but it was mostly fun and the girls had an amazing time, and that is what is important.

Here is where we stayed in Anaheim for the first three days. 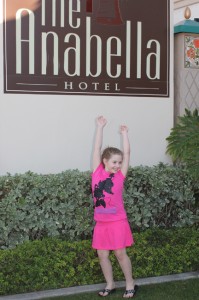 The hotel left “Princess Anabella” a note on their letterhead and then asked to take her photo by the sign so they could post it to their Facebook page. Anabella was beside herself with excitement. I had to check Facebook every hour to update her on her “likes” and “comments.”

And, of course Scarlett’s dreams came true when she finally met her hero, Mater. Yes, Mater. I know. 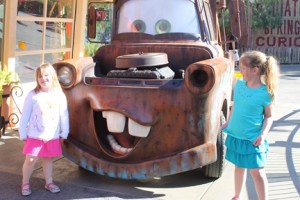 She told him she loved him as she walked up to get this photo taken. It was pretty adorable. 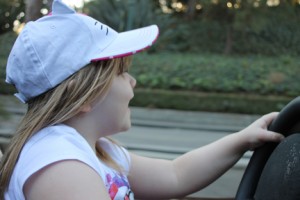 We rode a lot of kid rides, met a few princesses and did all the usual Disney stuff. Scarlett also got to try her hand at driving and I have to say, she is really good. Scary good. She was all “faster, faster” and barely ever hit the median. So I anticipate that this will be the child who sneaks the car out before she has a license.

We then flew to Maui for seven days. It would have been great if I had not gotten deathly ill on the plane. I spent the first three days in bed, but the girls had fun and spent most of their time here … 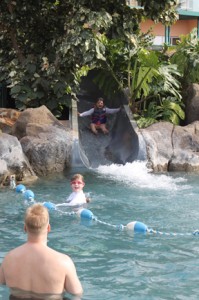 I managed to rally on day four and forced myself to at least go out to the pool every day. On our final night we took the girls to a luau. Here they are up on stage learning to hula. Again, pretty friggin adorable. And they loved being on stage. Total hams! 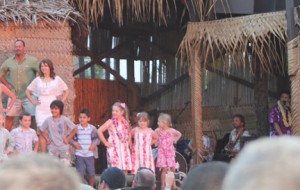 As for me, I am still recovering from the illness from hell, but I am starting to feel normal again. However, Dan and I definitely could use a vacation from the vacation.