Several months ago, Dan put Anabella and Scarlett in karate lessons. They love it … it makes them feel like little badasses … plus it teaches them discipline in addition to being great exercise.

Recently the opportunity came along to get their photos taken in their Gi (pronounced Gee). It was early in the afternoon, and it cost $90, so I figured we would just blow it off, but Dan decided he wanted to take them. When I got home and saw that they both had uncombed hair, I should have known this photo shoot went terribly wrong.

But it wasn’t until I got home and saw the following photos (which we paid NINETY DOLLARS for), that I realized just how “wrong” wrong can be.

That’s right. Those are my sweet little girls. Holding sharp objects and clearly battling dragons in Middle Earth. Or perhaps it is Armageddon? The big smiles are surprising considering they are standing in hot lava. 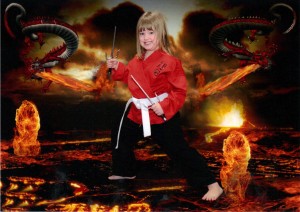 When I asked Dan about the background, he swore up and down that the girls chose it.

But this photo is what really sent me over the edge. We didn’t order this one. The photographer gave it to us.

Considering the other photos, he probably assumed we needed some religion in our lives.