I recently reconnected with a friend from high school on Facebook, who had the interesting idea of telling people two things he remembered about them.

One of the things he recalled about me was my extreme resistance to putting stickers on my car. Apparently, I had my senior parking sticker on an acrylic picture frame that I would stand up in the window. (I have completely blocked out this memory, but it does sound like something I would do.) So obviously the OCD/car obsession thing started early, but it also explains why I find most bumper stickers really annoying. (But I still love you if you have them on your car!)
My biggest offenders are the “honor roll” kids, Calvin & Hobbs urinating on company logos and these — the “look at my cute family” stickers that keep getting weirder and weirder.
For example, WTF is this? 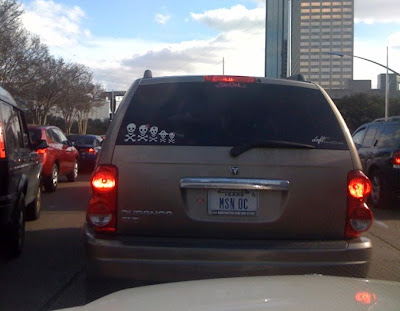 A pirate family? Why doesn’t daddy have a hat too? Where’s the parrot? Doesn’t this creep your kids out just a little bit?
“What’s that mommy?”
“That’s what you look like when you die.”
But this one is even better. I know I am confused, so I can only imagine how the kids must be feeling. Let’s see — there’s a daddy, a mommy … another daddy … four kids and two dogs. 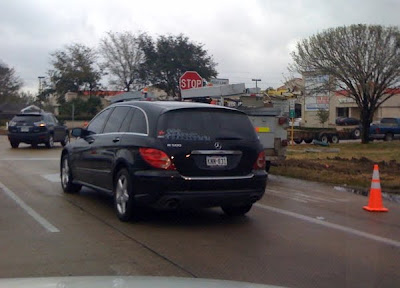 I don’t know about anyone else, but I am NOT signing up for the two spouse program.
P.S. Wondering what “WTF? Cat” Deucebag has been up to? Well, he has decided that it is too hard to just hang his head in the bowl to eat (while laying down), so now he knocks the bowl over and leisurely eats off the counter top. 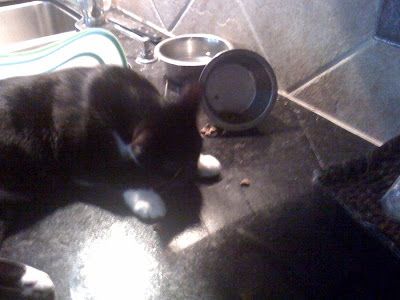