WTF is up with this Creepy VegHead? He moved into our HEB last week and he totally freaks me out. I especially dislike his onion mustache and Anabella is disturbed by his banana cheeks (and the fact that he is a 10 foot paper mache head!). So we’ve starting using the other door until he goes back to wherever he came from. 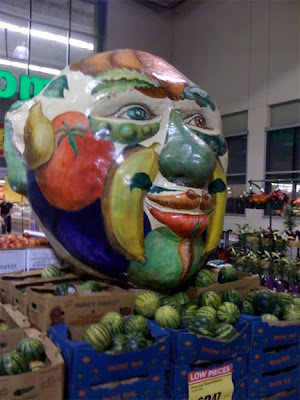 Facebook WTF?!
I know I need to quit bashing FB, but this one is truly disturbing. A guy that apparently went to my high school sent a friend request last week. I didn’t recognize his name, but we had 27 friends in common, so I went to look at his profile photos. What I found was one photo of him and about 30 photos of women’s butts. Just women bent over in this position or that, all clothed, but pictures of their behinds only. (These were his PROFILE photos — not a photo album of butts.)

I too have certain body parts that I find attractive, but I don’t think FB is the place to post 50 pictures of men’s whatevers. I wanted to send him an email that said “This isn’t FetishBook, it’s Facebook, which means I want to see faces, not asses.” But I just ignored the request instead. And then I started thinking about those 27 people who were not at all bothered. Did they just accept without looking at his profile? I’m no prude, but am I really the only person who finds that creepier than a 10 foot paper mache head?