I love mopeds. My first method of transport was a moped — my first driver’s license was Class M and I had two mopeds when I was 15 (one looked like a bicycle with an engine and the other was a fancy new Honda that was made entirely of plastic). When I saw this guy driving through downtown, I thought “cool!” But then I noticed his moped had a SIDECAR. WTF? 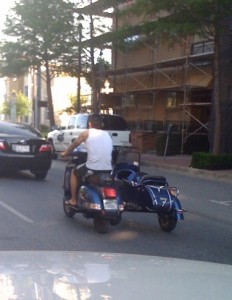 Mopeds are dangerous enough for the driver — I can’t imagine being shackled to the side in a plastic bowl.

On a recent trip to Texas Art Supply, I came across this: 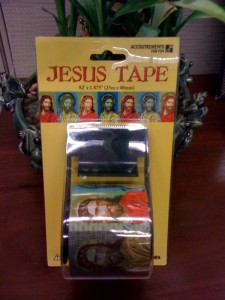 I don’t know how Jesus feels about it, but it seems a little wrong to me. When Dan and I went to the Vatican, we were shocked at the amount of crap they were willing to put the Pope’s face on. But, that’s just the Pope. This is Jesus!

Of course, I bought it anyway. We plan to move soon, so I will test the Jesus tape’s power with an experiment — put some highly breakable stuff in a box without wrapping it and see if it makes to the new house in tact. Maybe movers will be more careful if my stuff is wrapped in heavenly tape.