Just a few photos from our Halloween weekend. This is the first time Anabella understood what trick-or-treating means (“they are going to give me candy?!”), so she was really pumped. Scarlett went as a little witch. Couldn’t keep the hat on her, but she looked pretty cute anyway. 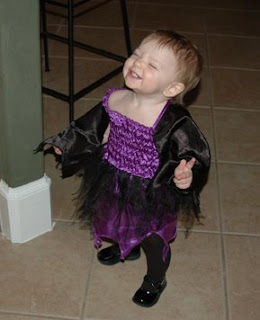 Anabella wanted to be a pirate … of course she had her “Arrrrrrr!” down perfectly, and she was the World’s Most Polite Trick-or-Treater ever, yelling “Thank YOU! Happy Halloween!” as she left every house. 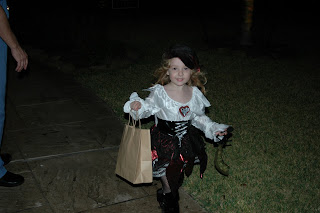 Here is Winston in his pirate outfit. That’s Chloe, our neighbor’s daughter, who wanted to share her candy … apparently Winston looked like he needed a tootsie roll. When I mentioned he could barely fit into his costume, she decided to keep it for herself. 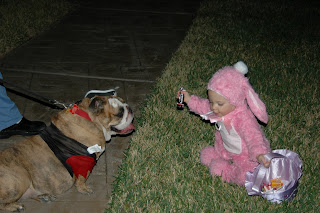 Saturday morning, we woke up to find a giant pile of itty bitty pieces of tin foil on the dining room table. I totally flipped out, thinking that Anabella had eaten 50 pieces of chocolate before 8:00 a.m., but then she showed me this.

I guess she just liked unwrapping them. Whew.

And here is a picture of Anabella at a princess birthday tea party on Saturday morning. She wanted to take the outfit off as soon as we got in the car.

And she was completely OVER it after 15 minutes and 3 cups of “tea.” I have to admit … I love that she isn’t a super girly-girl. Not that there is anything wrong with that, it’s just that I’m not a bows/bedazzled/glittery kind of girl either.
Anabella was completely disinterested in Cinderella, who had the full attention of all the other princesses, and spent about 20 minutes sitting in a chair, holding a fork, and staring down the cake. 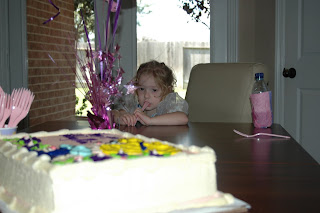