So November got away from me. There were several times that I MEANT to post this month, it just didn’t happen. Here’s the Cliff’s Notes version of what’s been going on:

PhoCusWright
Weird name, but the PhoCusWright conference took me to Scottsdale for almost a week. It was a combo of all the things I love … travel, technology, social media and several glorious nights sleeping alone in a bed. However, Scottsdale itself was like being on a different planet. At first I was really thrown by what appeared to be the AC units on top of all the houses. (My dad can give you the real explanation, but apparently it’s some sort of cooling system that works really well in the desert.) 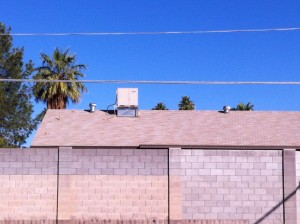 And of course, all the yards look like this. 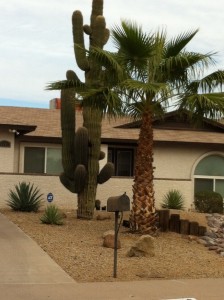 And they have cool street names like “Thunderbird” and “Cactus.” AND, most importantly, I had the best dessert ever at a local restaurant. It was called “Mexican Apple Pie.”

It came out on a sizzling fajita platter, and when he put it down in front of me, he poured a cup of “Mexican Brandy Butter” onto it. The cinnamon ice cream with the piping hot apple pie and booze butter was top notch. Ridiculously good.

Oh, and all the views in Scottsdale are pretty nice. I was stuck at an Embassy Suites and here is my view. Too bad I’m not a golfer because they have like one golf course for every 10 people in Scottsdale. 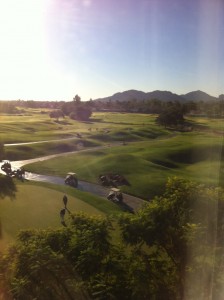 Work
Still awesome. Still loving it. Still exceptionally happy that I made the move. Missing my telecommute days and my 40th floor view a little less.

Thanksgiving
It was awesome this year. Had friends and family over for the entire day. The girls were super excited and made little hand print turkeys for everyone. The Texans won. The Cowboys lost. And because Dan, the best husband ever, bought me a new refrigerator while I was in Scottsdale, I had a perfectly good and empty fridge in the garage to store all the leftovers in. Which meant I didn’t have to clean up too much until Friday. Yeah. 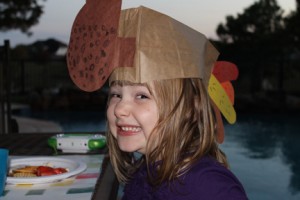 So November was a good month. Now on to Christmas. Can you believe it is effing Christmas already?

Anabella and her girl scout troop are decorating and riding on a Holiday parade float in Pearland this coming weekend. 15 seven-year-old girls… I’m sure nothing is going to go wrong there. Ha!