On Sunday, we had incredibly gorgeous weather, so we decided to take the girls to the zoo. I was a little hesitant because a baby elephant died last week and Anabella always looks forward to seeing him. Luckily, three-year olds are easily distracted by leaves or pigeons or whatever, so we didn’t have to deal with the death issue this trip. 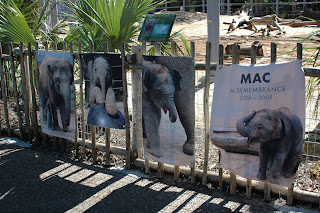 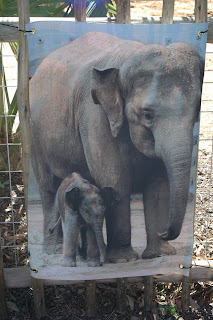 All of the animals were out enjoying the cool weather. I even managed to get most of them to look right at me for a photo. 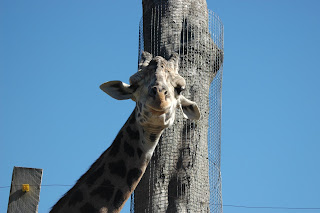 Does anyone else watch Meercat Manor? We love that show and our zoo has a really cool Meercat exhibit. 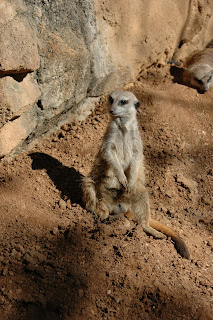 The big cats are usually hiding mid-day, but they were all out lounging around on Sunday. Look at the paws on this big boy. 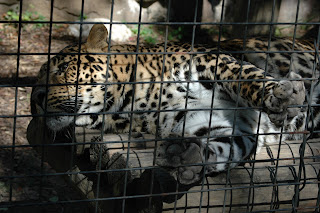 Only in Texas would you find an armadillo on the carousel. And look at Anabella’s face … she cracks me up. 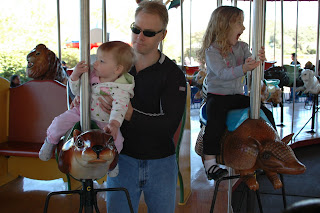 Oh, and just so you know. Sunday is Leather-Pants-For-Dads Day at the zoo. WTF? 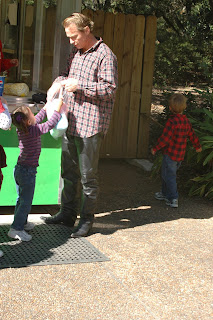 Okay, here is the real zoo scoop. This is a very bad monkey. 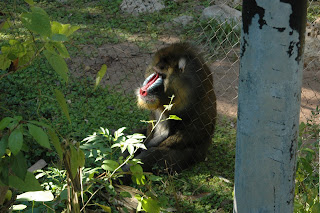 I could skip the monkeys all-together, but Anabella loves them (probably something about sharing a love of playing with poo). Anyway, this monkey was acting all freaky, so I ask Dan “what is he doing?” Within seconds it became VERY clear what he was doing, so we steered Anabella in the other direction.
As we get to the other side of the cage Mr. Spank lives in, there he is again, plopped down in front of the crowd. Before I could even ask if it was the same monkey, Dan, Anabella and Scarlett were off to the next exhibit. I decide to take this picture (so I could blog about him) and before I get my eye away from the lens, Mr. Spank starts up again … and “finishes” his business. That’s right, I got a telephoto view of the whole event.
And really, this is all my friend Halle’s fault. Just last Friday she was telling me that she and her husband were reading my blog and she couldn’t think of anything worse than getting blue poo water on yourself.
Well, guess what? Watching a monkey enjoy a happy ending is worse than blue poo water. I can’t even believe I am saying that, but seriously people, I was very disturbed and now have that burned in my mind forever.
BAD MONKEY. Being a mommy doesn’t leave a lot of time for naughtiness, but recently I decided to partake in some naughty behavior and quite frankly, I loved it.

Naughty Rhonda heads to the voting booth: Last November, the husband of a woman in the MOMS Club was running for a Texas State Representative position. This woman sent email after email, telling us all to vote for her husband. As if that wasn’t annoying enough, one day her 3-year-old pushed my 1-1/2 year old daughter to the ground, where she hit her head on the concrete floor. Usually, I would just chalk this up to kid stuff, but the woman didn’t even apologize. I was livid. So, I decided not to vote for her hubby, even though his opponent was DEAD. That’s right, I voted for a dead woman. And I laughed all the way out of the polling facility.

Naughty Rhonda attends a Christmas party: My friend Halle had a White Elephant party in December (if you don’t know what that is, go here). It was mostly ladies from her neighborhood, but she also included some of her closest friends. (Meaning I only knew about 5 people out of the 30.) So my friend Tracie and I took a prime spot on the couch, and with wine in hand, decided it would be fun to antagonize some of the other party goers. Not in a mean way of course, we simple encouraged more of the craziness that was already happening…picture a house full of women scheming and bickering over $25 gifts. We had women battling over a bottle of Grey Goose, a clock, and a spa gift certificate. It was a total hoot…and I went home with the much-coveted clock. HA! Here’s a picture of the chaos…. This is Wendy after Jen “stole” a lovely basket of goodies from her. I was laughing almost as hard as Jen was.

Naughty Rhonda goes to a football game: Whenever my husband sees a “family” bathroom he always teases me about sneaking in and making out. This has been going on for years, but at the last Houston Texans game of the year, I called his bluff. We waited around outside the door until all the families (with real reasons to be in the family bathroom) had their turn and then in we went. Who knew the family bathroom could be so much fun?

Therefore, I resolve to continue with this trend of occasional naughtiness in 2007…it makes me laugh and it keeps me feeling young.

Have you done anything naughty recently?

…so I am confessing my deep, dark secret to you instead of Postsecret.com or my husband (who hopefully is not reading my blog today).

Back story: The hubby and I pride ourselves on feeding our daughter quality, healthy foods. We figure she has plenty of time to eat bad stuff later. So we try to buy organic whenever possible, no juice or soft drinks, lots of fruits and veggies, nothing deep fried, and no crap (such as Lean Cuisines with 14.1 percent chicken)…until this week.

Here are the things my daughter has tasted this week.

1. Mocha Frappuccino (She was screaming and pointing at my cup, so finally I got frustrated and let her take a sip….she didn’t like it. Whew.)

3. Chocolate chip cookie (The whole thing. She loved it. She licked her fingers and picked the crumbs off her shirt.)

4. Cat food (She got to the bowl before I could catch her. I think she only ate one piece, but she seemed to like it better than the mocha frap.)

So there. I guess I win the Bad Mom of the Week Award. Hooray.

I am hiding all kinds of ridiculous things lately. And while I am very good at hiding, sometimes I am not so great at finding. (Somewhere in this house is my one and only sex toy that I was scared my maid might find. Neither of us has come across it in almost 2 years!)

Last night the hubby and I decided to go to a movie. We called the babysitter and she was available. Time to hide some stuff. No, not my jewels or our other riches, but food we hoped to see when we returned home.

The issue with the babysitter (a long-time, single friend of mine who is 6’1″, thin and eats like a football team) is that 1.) she tends to gravitate toward very expensive food or things that my hubby has bought as a special treat for one of us and 2.) she eats things in their entirety.

Last month the hubby brought me back a box of dark chocolate from Holland. I assume it was fabulous, because she ate it all in one evening. (She had cleverly taken out the trash, so it was as if the chocolate never even existed!) Another time she ate a POUND of fancy peppered salami that we bought for a little shin-dig we were having the following evening.

I personally find it kind of amusing, but the hubby gets a little irritated, so off I went to hide our beloved treats. The Mini Milanos went under the rice. The Reese’s left over from Halloween went behind the tea. Then, the hubby calls out “don’t forget to hide the salami.” (A game I never thought I would play with the babysitter! )

The bachlorette party was great. We wound up at Dick’s Last Resort for the last half of the evening and I have to admit that I had a lot of fun throwing paper at other patrons and being rude to the cute waiter.

Here is our happy bride-to-be, wearing a fabulous paper hat that unfortunately gives away her big secret…. 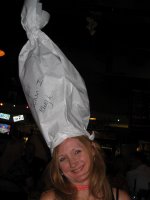 In case you can’t read it…”I pee when I laugh.”

Other fun antics included Marjorie getting all the truck drivers to honk their horns as we drove by. (Remember how fun that was when you were like, 12?) We also had the cops on the Riverwalk harass a really drunk Carol toward the end of the evening. They wouldn’t handcuff her but they did poke her with a nightstick.