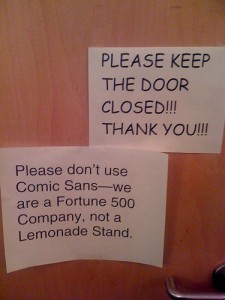 Back in 2005 when I had Anabella, I joined a local “moms” club to make some friends (meaning find some people who were going nutso like I was). When the group found out I was a communications consultant, I was immediately roped into taking over the club’s newsletter. When they sent me the WORD file, the whole thing was done in Comic Sans. From that point forward, I developed a serious aversion to the font. The sign above could have been written by me. It wasn’t, but I totally get it.

I also recently came across this post about Comic Sans on McSweeny’s. I almost peed myself. Read it.

The bleeding of my bank account that is. Have you ever had one of those weeks when money acts like you have a BO problem? Mine can’t get away from me fast enough at the moment. First, our cat Deuce falls deathly illl last week. Complete blockage of the bladder and near kidney failure. Three days in kitty ICU = $1,200. Then our AC downstairs breaks down Saturday night. One fan motor = $660. (Me, Anabella and two cats sleeping in a twin bed upstairs = priceless. And also sleepless.)

Now my car is pissed because it wants to be serviced and keeps dinging at me and telling me “you are 100 miles past service” so I called the dealer to make an appointment. Service for my bitchy little car – $500.

Before I start ranting, HAPPY ANNIVERSARY to Dan the man. Today is our 9th wedding anniversary and I’m really happy that he still loves me and thinks I’m hot. You rock, baby!

Next, I would like to say WTF WordPress? It took me a friggin week to figure out why I couldn’t upload pictures. Blogger is limited, but it’s way easy. I love my new site and theme, but getting out the kinks is quite time consuming. (And not as easy as all the WordPress lovers would have you believe.)

Okay, let’s move on to Jenn-Air.

Last Saturday night, I was home alone with the girls, and decided to make some tater tots to go with our dinner. When the timer buzzed, I went to open the oven door, and THE ENTIRE THING CAME OFF IN MY HAND.

Luckily I jump a lot faster than even I would have figured. I managed to get out of the way as the door, which was heated to 450 degrees, crashed to the floor. It sounded like a small explosion and sent glass flying everywhere.

Of course I was barefoot, and the girls were running around barefoot, so there was a total girly freakout next. Scarlett was crying, Anabella was repeatedly asking “what happened?!” and I was screaming at them to stay away. Once I walked through the pool of glass, and tried to figure out what to do with the steaming hot door, I realized just how f*cked up the whole situation was. Have you ever heard of this happening? WTF Jenn-Air? Really? The door just comes off? My mom has 30-year-old, total piece of crap oven in her house and its door has never just popped off. And did I mention all the little burning glass shards that left marks on my hands, feet, legs and chest. No bueno, Jenn-Air.

So now the “safety team” is deciding what to do. The company that repaired the hinges on the door in November under our extended warranty is claiming no fault, and Jenn-Air has only agreed to cover labor at this point (the parts are $600 of course). I can tell you this. There is no way in hell I am paying one penny.

This may be my biggest battle yet. Bigger than Poopgate of 2007! Stay tuned … 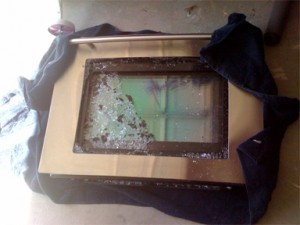 Please go take a look at my profile and tell me how my age became TWO HUNDRED AND FIFTY?!!!! That is not even funny, Blogger.

I intend to change it, but I just wanted to give you all a chance to see it and be outraged first.

Exhibit 4 – EVERYONE has a something to tell me

I can’t drive down the street or drink a cup of coffee without someone taking the opportunity to give me some crazy/pointless/inspirational/unintelligible/marketing/doomsday message. See some examples (taken just this week) below: Can’t I just eat my chocolate in peace? Do we have to fill every open space with something?

First green onions, then spinach, and now peanut butter. Nothing is safe to eat anymore. I mean, really, how exactly are feces getting into the peanut butter??!

And here is the crazy part…

My babysitter (the one who can eat a pound of salami in one sitting) has had bathroom “issues” for over three weeks. About two weeks ago, she tells me that her dog now has the same issues. Well of course, it turns out she has been eating bad peanut butter…almost FOUR jars of it…over the past four weeks. So, 1.) Who can eat four jars of peanut butter and not weigh 400 pounds? and 2.) How are she and the dog not dead? Either she has a killer immune system or they both just built up a tolerance from eating two peanut butter/bacteria-laced sandwiches a day. (Like how people in Mexico don’t get sick from the water?)

And yes, she feeds her dog sandwiches…do you really find that surprising?

P.S. HAPPY HAPPY BIRTHDAY to my fabulous husband, Dan, and to my best friend from high school, Halle. Both of whom turn 35 today! Welcome to the downhill slide guys. 🙂

Do I really need to pull out the soapbox for either of these stories? The reason why I think these two stories further exhibit the downward spiral of society (beyond the obvious, of course) is that 1.) wearing a diaper so you can kill someone faster takes a special kind of crazy, especially when you are one of an “elite” group of people who are loved and admired by people everywhere. I mean really, who hates astronauts? And, 2.) BAKING a puppy, and then showing it to neighborhood children, shows a complete absence of a heart. I would really like to know more about the parents who raised these two monsters.

Here’s a blog on the whole ordeal, if you are interested in making yourself feel bad. http://georgiapuppytorture.blogspot.com/

1. They cost so friggin much.
2. I don’t have a choice on whether or not I am going to buy them. (And I don’t seem to get much choice on when I buy them either.)
3. They don’t make my butt look smaller or my legs look longer.
4. They are ugly. Maybe if they came in pink I wouldn’t mind spending $1,700 on four of them! (I could be sporting 3 or 4 killer new purses with that kind of cash.)
5. Every time I look at them, I think of all the other fun things I could have done with that money.

What “necessities” do you hate spending money on?