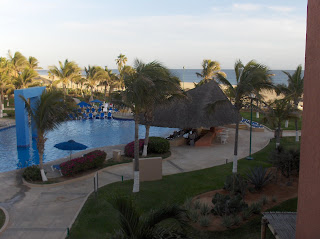 This is what I was looking at yesterday morning. Today, I’m staring at a cube wall. Well, only until 1:00 p.m., but still. WTF?
More Christmas Trauma
So, this time last week I was trying to get a picture of the girls with Santa. (Here is last year’s attempt in case you don’t remember. ) After an hour wait, and Dan spending lots of time walking the girls around the mall, I finally got to the front of the line. The lady took exactly one picture before Scarlett burst into tears. 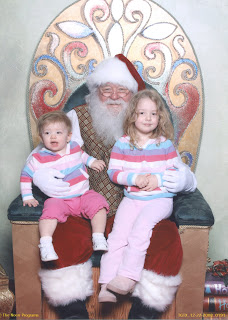 WTF? Why does Scarlett hate Santa so much? Anabella loved Santa as a baby … and look at him. Could he a better looking Santa? Scarlett wrestled around … got her clothes all askew … and then had a total meltdown. Why can’t I get one decent Santa photo out of these two??

Hi everyone! Hope your holidays were fabulous. I’ll blog about ours later (I’m at the airport) but let’s just say Anabella got a truck load of toys but only wanted to open her M&Ms and mommy discovered her second gray hair on Christmas day.

Dan and I are heading to Cabo San Lucas for three glorious kid-free nights, so I will be gone for a few more days.

Blogger Dan: our bet on the Texans game tomorrow is on. If you lose, I want either a can of Garrett’s popcorn or meatballs from Rosebud (but I’ll need to have those overnight. Ha!) Figure out what Texas treat you want … Not that it’s going to matter.

— The B.S. Cafe is now serving guacamole and margaritas. 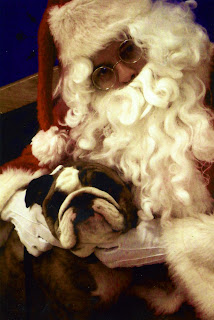 WTF? Why is Santa trying to choke poor Winston? 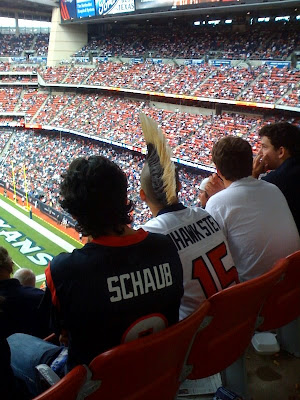 First of all, GO TEXANS! Thank you for beating the Titans (without the involvement of poo water). That made my whole week. (We left a little early and as we walked by the port-o-potties, the hubby said “Maybe we should splash a little blue poo water on you … just in case. Thanks, Omar. I will never escape that now.)

Second, Dan (not the hubby … the other one) has extended a bet on the Texans vs. Bears game and I hereby accept. But what should the bet be?

Third, what do you think the guy above does for a living? I have been passing by him for several years now as I head down to my seats. And he has always had this hair style. And he obviously has season tickets. So I can’t help but wonder…

So we had some real excitement at my office this past week. It started around 5 p.m. when the smell of burnt popcorn filled the air … really filled the air. Less than a minute later, the fire alarm goes off and the loud and unintelligible voice of security comes over the intercom and tells us to “go to the stairs … blah blah blah … evacuate.”

While we all pondered whether or not to actually leave, our department head comes by and says something about setting a bag of popcorn on fire. HA! No way! Now we are all very amused and not the least bit worried about dying in a high-rise blaze. (Granted it’s time to go home, but the elevators have been shut down and we are on the 35th floor.)

Apparently someone did call security to let them know what happened, but that didn’t stop them from sending 17 (SEVENTEEN!) emergency vehicles to our building. (Although, you can only see 11 in this photo … sorry for the sucky quality, but that’s the best my iPhone could do from the window, at sundown.)

This is the person responsible (our boss), hiding in her office in shame. 5:35 pm – The firemen arrive on our floor. So thank goodness it wasn’t a real fire, or we all would have been toast. I counted seven of them, but there may have been more. I was trying to be inconspicuous with the photo taking. 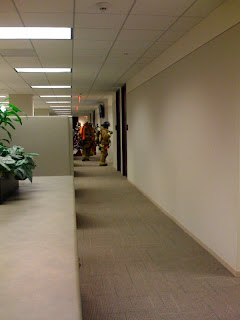 And here is the culprit. I wonder how much this bag of popcorn really cost in the end? 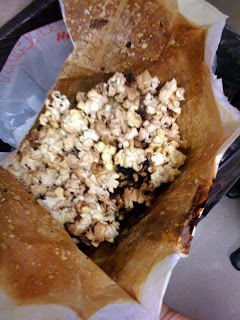 The biggest lesson learned was … I am way too lazy to walk down 35 flights of stairs. And that popcorn only takes about 2 minutes to cook in our office.
P.S. The title comes from a coworker who called up to make sure we were all okay. 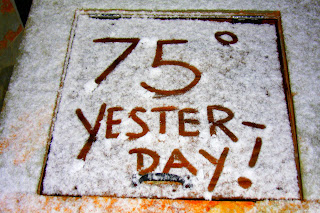 Not that it wasn’t totally cool, but it just doesn’t snow in Houston
— The B.S. Cafe is now serving snow cones.

Just pretending to be 3 years old
Over the weekend, my angry chick went missing. I knew Anabella was the culprit because I have had to tell her several times not to play with it. (“Art” and “breakable” don’t mean much to a 3 year old.) 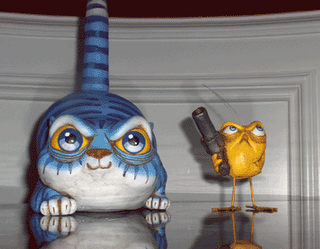 Me: Anabella, where is mommy’s bird?

Anabella: Birds are outside. (runs to window) Nope, no birds outside right now, mommy.

Me: Where is the bird that mommy has on the desk in her office? The one you were playing with yesterday?

Me: Yes. Let’s go look. (walk into my office and point to where Angry Chick used to be)

Me: Anabella, did you move mommy’s bird?

Me: Anabella, the kitty misses her friend.

Me: Yes, the kitty is very sad.

Anabella: Oh. (thinks about it for a minute.) I broke the bird. He’s in that box. (pointing under desk) Sorry, mommy. (leaves the room)

Sure enough, angry chick was thrown in a box … her gun barrel broken off. So apparently my sweet little girl was taking me on a silly, wild chicken chase, all the while knowing exactly what I was talking about. When did she get so smart … and devious?

Coolest Car Ever
Okay, maybe not the coolest car ever, but look at what my car did the other day when I was dangerously close to running out of gas. 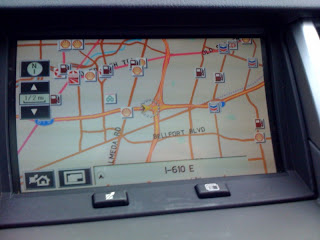 It took the initiative to find me 20 gas stations within the range of the amount of gas I had left. The only way it could be any cooler is if it said something like “Hey, dumba** … you will be walking in about five minutes if you don’t get some gas.”

Secret Santa
I convinced my coworkers to participate in a Secret Santa exchange this week. Look what I got today … 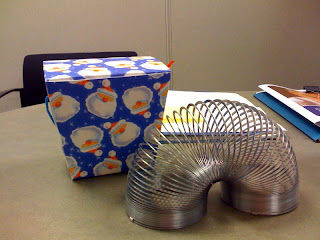 It’s an old-school slinky … no plastic, child-safe crap going on here. It’s better than a stress ball, which is why I’ve been playing with it all day. No sense being productive on a Monday, right? 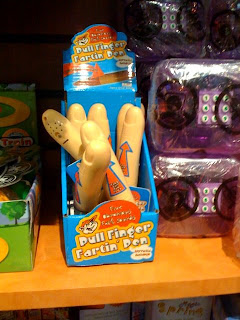 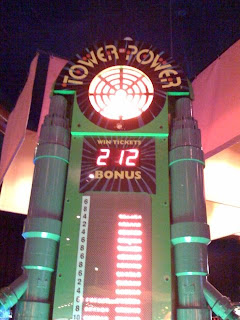 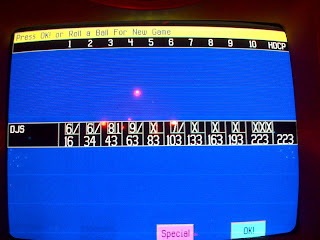 I somehow got sucked into watching the Britney special on MTV tonight and it reminded me of this spoof from The Soup.